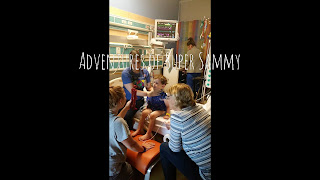 We definitely had some highs and lows over the last few days. Definitely a bit overwhelming for all of us. Over the last couple days we have seen Sammy gained a ton of motor functions in his limbs. His left arm he is moving all over the place without any stimulation, which was the limb that was having the least response in up until this point. Over the course of the day his movements became even more pronounced. He also rolled from side to side last night in his sleep, which is huge as well. We are not seeing many intentional purposeful movements, but any movement is great right now.
On Friday they tried to place a PICC line, which is a longer term central line for. However, that was failed. It made for quiet the emotional day. They attempted to place in both legs, but the line did not go where it was supposed to go, and ultimately they pulled it out later that evening. They may or may not attempt to place another PICC line. They also attempted to pull the foley catheter, but ended up having to place it back again after Sammy was unable to urinate on his own. Another stressor for the day.  The therapists all came for visits as well. We worked on oral stimulation during feeding therapy. They worked on sitting up and tracking with his eyes during OT/PT. They also did an ECHO test on him to ensure not issues with his heart, as his heart rate has been soaring upwards. Everything came back clear.  Friday was definitely a tough day.
Over the weekend we had a very rough couple of days. Sammy’s drain was leaking at the back of his head again, which means we had to lower the tube pressure down again. Again the drain is what is keeping us in the PICU for the most part. The drain must get removed for us to move to a different floor. Because it was leaking and taking the path of least resistance, not going though the tube, they had to put another stitch in place. So far there has been no leaking since, thankfully. They will slowly begin to raise the drain again (pressure in the drain) and attempt to get to a place where the drain can be removed. Or Sammy will have to have a shunt placed.
They did a few more tests over the weekend for him as well. They did an MRI which came back with no concerns. Everything looks as it does for being a little over a week post-op. They also did x-ray of his abdomen to make sure there were no more signs of trouble with his liver. Everything is coming back clear. Which is great.
He was experiencing a lot of pain/frustration over the weekend. It was really hard on us all. His heartrate was skyrocketing up in the 200bpm. I ended up asking to pick him up and just hold him, which helped calm him down quiet a bit. I ended up laying in the hospital bed with him for most of Sunday just to keep him calm. He did finally sleep well Sunday night. Hopefully we will have better days ahead.
PRAY for his continued healing. PRAY that they are able to wean him off the drain, so as to eliminate the need for him to have a shunt placed. PRAY for him to have peace and calm as he continues to become more aware of his situation. PRAY for all those that come in contact with Sammy. PRAY for us all as we face some tough decision ahead as we learn more about Sammy’s diagnosis. PRAY for continued calm and peace.

Posted by Adventures of Super Sammy at 10:57 PM