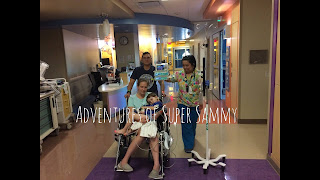 These last two days have been great days for Sammy. He finally got some really good rest, as did we. Last night was the first really great night of sleep I think we all got since we got to the hospital on the 19th. Which was certainly needed. The last couple days have been a bit crazy, in good and in overwhelming ways.
Sunday night Charles left to go back to the Air Force Base he is currently assigned at to finish his last bit of training. It was a really hard decision, but we both felt it was the best of the options presented to us. He only had a few days left on his orders and figured that was better than a possible month of make up down the line at some point. So he went. Monday he let me know that he was finishing that day and would be home in the evening. Such an awesome blessing. We are so grateful that they were willing to make this happen, so he could come back to where he needed to really be without penalty of having to make up the time down the line. Whatever he has left in his training will be done during future Reserve weekends. They are granting him to return here till his orders are finished the end of this month. We are so grateful for this gift. So Charles got back to the hospital Monday night.
Today has been a very busy day. And I am so glad Charles was home to be apart of it all. Sammy got to stand up using a contraption that fully supported him in a standing position. He also got to leave the hospital room and go for a walk around our floor of the hospital. A nice change of view for him, plus he got to be in my arms and get mama cuddles. His Grammy actually got him to laugh. Which was the sweetest sound any of us could ever hear. It was so amazing to hear a little piece of my Sammy back.
Today we also met with the oncologist about Sammy’s case. His oncologist spoke with us for over an hour about Sammy, discussing his diagnosis and giving us an idea of their treatment plan for Sammy. Sammy is diagnosed with standard medulloblastoma. It is a rare form of childhood cancer, but it is the most common childhood brain cancer. As brain cancer is rare. We were told today that they felt they removed as much of the tumor as possible, but no way to say that they absolutely got everything. They will be doing a spinal tap later this week to make sure that the cancer cells have not spread. Right now he is placed at average risk, but if something is found his risk level will change to high. They would like to do the Head-Start III protocol with Sammy. Which is a chemo only treatment plan. His oncologist explained to us that he feels the risks to using radiation on a child like Sammy at his are not worth the benefits at this point in his journey. Radiation has a lot of risk associated with it. This does not mean that radiation is off the table, but that they will not be starting his treatment with radiation.
The Head-Start III protocol (from my current understanding) will be 5 rounds of chemo. Each round of chemo is a 28 day cycle. The first 3-4 days will be the chemo treatment, followed by 2-3 weeks of recovery, followed by whatever is left to go home before the next round begins. This will be an inpatient treatment, so we are told to expect to spend majority of the next 6 months living at the hospital. We will be learning more specifics over the next couple of weeks, but we got the basic overview today as a starter.
We have a lot to figure out for the days and months ahead. And will certainly be needing a lot of support. We have a lot of questions to and pieces to still figure out in the journey as we are only really beginning to get a glimpse of what this adventure has in store for us. But for now we have a place to start. A basic time line and a general idea of what is ahead of us. Now to start putting the puzzle back together and making the pieces fit.
PRAY for continued healing for Sammy as he recovers from his brain surgery. PRAY he continues to shine through despite all the challenges he currently is facing. PRAY we are able to clearly explain all that is happening with Sammy and that he is able to understand all that he needs to understand. PRAY for us as we fully begin to process his diagnosis and what that means for us all. PRAY we just will know if this is the right place for us to be for his treatment. PRAY we will be shown clearly if this is not the place we are supposed to be for our journey. PRAY for our spirits to be calm and peaceful. PRAY for healing of our hearts as we learned last night our family dog was killed over the weekend, and PRAY for our boys as we try to explain to them the loss of their furry brother. PRAY for each person  that plays a role along Sammy’s journey. PRAY we all have another restful, refreshing night of sleep.

Posted by Adventures of Super Sammy at 11:00 PM