Our family thanks you for joining us on the adventure with our son Sammy as he fought medulloblastoma, a form of pediatric brain cancer. We hope that you will share Sammy's journey with others, to bring awareness to childhood cancer. 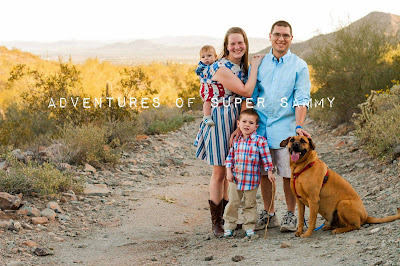 I am Kristen. Wife to Charles. And mother to our two boys, Sammy and Logan. My life since becoming a mom has been all about our children. Providing the best I possibly can for them by advocating for their needs. Helping to mold them into the little people we want them to become. Prior to becoming a parent, I was a firefighter. My career started in wildland firefighting in a remote mountain town in Arizona, followed by being an industrial firefighter for Boeing. Eventually, I had to walk away from my career, as I suffer from chronic sciatica. However, it opened the door for me to be a full time mom, when the time came. I usually enjoy my role as full-time mom. This job has been far from boring, and always keeps me on my toes. In what free time I do have, I enjoy a good book and a glass of wine. And usually can be found sitting behind a sewing machine or working on some craft or another. As for now in this journey with Sammy, I am trusting that God has a plan for our lives, and trusting he will carry me through this adventure no matter where it leads.

My spouse is Sammy's hero, ranks right up there with Iron Man in his eyes. Though I believe that statement goes both ways, as Sammy is truly our hero. Sammy is so proud of his daddy and all that his daddy does. Charles is a full time police officer and is also in the Air Force as a reservist. He takes a lot of pride in serving our community and our country. He enjoys big boy toys of guns, four-wheeling and cars. But mostly, he is daddy to our boys. He absolutely loved coming home to the excited greetings of "daddy" from both of them. A moment we miss from Sammy, but love that we still enjoy from Logan.

Logan is Sammy's younger brother, who was born April 2015. It took a while for Sammy to warm up to the idea of being a big brother, but now so much of his joy and laughter comes from spending time with his brother. Sammy really grew into the big brother role. Logan is a fire cracker, and certainly keeps us all on our toes. He has no fear, except when it comes to vacuum cleaners. Logan started out life with a speech delay, but you would never realize it now. He still has some speech impairments, but he does not stop talking and his language skills are very advanced. Logan was diagnosed officially with autism in November of 2018. He is also a high risk for ADHD, but is very young to be definitively diagnosed. We also believe he suffers from PTSD. And has sensory processing disorder. We are still struggling to get the right support in place for him. But we are working on it! Logan loves monster trucks, and legos. He can be found usually trying to convince someone to build a fort for him or convincing them to play hide and seek. He loves seeking hows things work. Logan loves watching ice hockey and is currently learning how to ice skate, so he can play ice hockey too. He loves to wiggle and move. Dancing is definitely his go to groove. But does not stop when the music stops. He is our wild child, who is always on the move. Logan is full of life and love.

Sammy, our Super Sammy. Our oldest son born January 2012. Sammy already has such an incredible story going into this new adventure. When Sammy was 1.5 years old we had him evaluated for a speech delay, he qualified. After much struggle getting him started in speech therapy, we finally got him going right when he turned 2 years old. By the time he was 2.5 years old, I became increasing concerned about his developmental improvements, and somehow landed on wanting him to be evaluated for autism. By age 3, Sammy was diagnosed with autism spectrum disorder, where he fell mildly onto the spectrum. The biggest area of concern was his communication skills, but also had issues with both sensory and social areas as well. We jumped head first into therapies, as we were encouraged to hear that if we dove right in his chances of having a more typical life were highly possible. So in we dove. Sammy began about 35 hours of therapy a week. The bulk being ABA therapy. We rapidly saw Sammy making huge gains in his development. Our once barely verbal child was making huge strides. We also enrolled him into a private preschool. One that was a huge part in his journey forward. We saw such positive things come out of him attending a typical preschool and being surrounded by such amazing teachers and staff. The peer to peer was irreplaceable in helping him make these huge strides forward. We have been so proud of his accomplishments in his development. Along the way we decided to also start Sammy in martial arts, another wonderful addition to his therapies. I can not speak highly enough of having him take part in ATA. Sammy has always been special and such an amazing child. He never ceases at amazing me. I am very proud of him. And so excited to see who he becomes as his grow. We know he has the fight and the courage to take on this new challenge, because we have seen him overcome so much already. We will have our Sammy back one day, he will never be the same as he was before. I have no doubt that he will be even more amazing.