Yesterday, we met with the Bone Marrow Transplant (BMT) team to discuss the transplant that Sammy will have during the course of his treatment. This conversation gave us a ton more information to process, but also answered a couple of our big question in terms of Sammy's treatment.

At the end of the next round of chemo (his second round) the BMT team will be harvesting stem-cells from Sammy. His transplant will be using his own bone marrow cells, so they need to harvest them early in his treatment process. So to harvest his cells, they will be tracking his levels closely, and when they are ready they will be placing a new IV in him, one that has thicker walls to handle the process of the draw. They then will draw out his blood into a machine that will separate out the cells they need and return the rest of his blood back into his body. So it is a non-invasive bone marrow harvest. Huge sigh of relief. And that is it, it will take at least a day of draws, but no more than five days to harvest the cells they require. Then he will continue on with his chemo round and start the 3rd round of chemo.

Sammy will then continue to receive his next few rounds of chemo, totaling 5 rounds of the Head Start III protocol. Following his 5th round of chemo, he will has his care transferred to the BMT team. They will administer a 6th round of chemo. This round of chemo will be highly toxic to his body. Basically a lethal dose of chemo, if they did not have a way to rescue him and help him recover. The rescue is his stem cells that they previously harvested. The chemo will kill his bone marrow, so they will give him his cells back, along with giving him shots daily that will encourage cell growth, so that he can recover from this extreme dose of chemo.

We are told expect this last round of chemo with the transplant to take 6-8 weeks. So this adds some time and extends Sammy stay in the hospital. At best case scenario, Sammy's treatment without any interruptions will take 7 months, so another 6 months from now. Putting us at June in best case. We were told when we started this journey to plan 1 year of being in and out of the hospital. Mentally I am preparing to be here till August, but know that can be extended.

Obviously, this meeting left us with a lot of information to process. Along with a very heavy reality of what Sammy will be going through in the months ahead. There is not one easy thing about it. But we are all just taking it one day, one moment at a time.

PRAY for our family as we process this information and prepare for the first part of this process in the coming month. PRAY for our family as the reality forward that we will be in hospital for 2 months longer than we initially expected. PRAY for Sammy as he continues in this battle. PRAY that they are able to get the cells needed, plus some (ideally enough for 3 transfers). PRAY for a spirit of calm and peace to surround him daily. PRAY for him as he processes all this new. PRAY for our family, and for our Sammy. 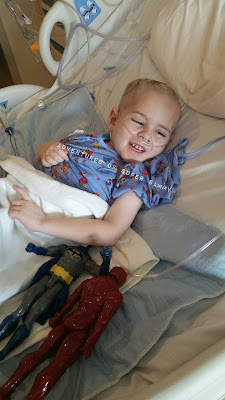 Posted by Adventures of Super Sammy at 3:52 PM