Sammy's adventure is rarely calm. We keep him pretty busy during each moment of this journey. It seems like everyday there is something new happening, but that is not necessarily a bad thing. Sammy is making amazing progress in recovery from the effects of posterior fossa syndrome. Over the weekend we got him to give us a thumbs up and he also signed "more" to us. We have seen a significant improvement in his purposeful movements in both his arms and legs. He helps now in getting dressed by pushing his arms and legs into the openings. He is grabbing and holding a lot better. His movements are slow, and can see they take a lot of concentration, but he is doing amazing. Slow, but steady progress. He is working hard with the therapists, and with Charles and I on our own. 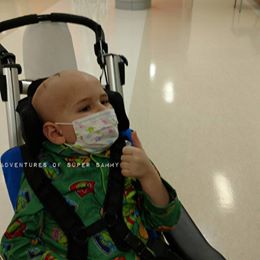 Yesterday, Sammy had a kidney function test in the early morning. Followed by a BAER hearing test in the later morning. Both of these are used as base lines to see where he stands before each round, and if any changes have occurred from round to round of chemo. Everything looked great on the kidney function test. No concerns. The same was true of the hearing test. There has been no change in his hearing since his last one. Which is great news. The reason for these two specifically is that the chemo drugs he is on can cause hearing loss and can cause diminished kidney functions. We are very happy that there are no signs of either at this time.

As of right now, it is looking like Sammy will be starting his next round of chemotherapy tomorrow. This may change, if he has another really bad day starting in the morning. Today was rough. It started out great, but quickly deteriorated. He became agitated, and appeared in a lot of pain. We believe he was having head pain, most likely a migraine type headache. None of the medications he was given throughout the afternoon even slightly touched the discomfort he was feeling. It made for a very long, hard day for everyone involved. He eventually fell asleep, just passing out from pure exhaustion around 1900MST. The oncologist came by in the afternoon, and said they may push off starting his next round of chemotherapy if he is still having a really rough go. They are hoping to get him a better pain management and nausea management in place to help with the discomfort he is feeling. We are praying for a better night tonight. Praying that he sleeps easy and soundly. That he wakes feeling refreshed. If he is doing better tomorrow, they will proceed as scheduled. If he is having a tough day, they will postpone the start of this new round, until they feel he is in a good place to start it.

PRAISE Sammy finally fell asleep. PRAY he continues to rest all night and has an easy night. PRAY that he wakes feeling better and ready to take on the first day of his second round of chemo. PRAY that both Charles and I get a good nights rest and feel refreshed going into tomorrow. PRAY for me to have the patience to tackle another hard day ahead and be able to be the rock that Sammy needs me to be in his journey. PRAY for the side affects of the chemo to be minimal. PRAY for that the nausea subsides and he is not uncomfortable with his feeds. PRAY for his treatment to function the way it is necessary to clear his body of every cancer cell.
Posted by Adventures of Super Sammy at 8:53 PM