We have had some great news the last few days. The biggest news was given to us yesterday. Sammy's MRI came back clean!! 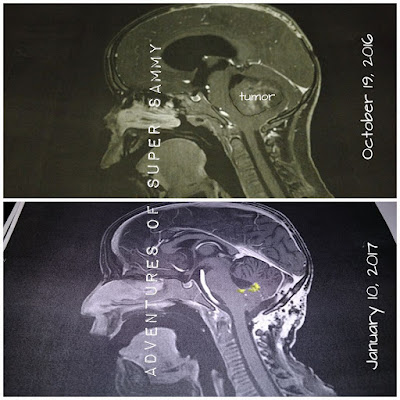 As you can see on the first MRI done on October 19th, shows where the tumor is in his brain and how it was impacting his brain. The tumor squished the cerebellum portion of his brain out of the way and forced his brain stem to move as well. This caused the hydrocephalus, fluid build-up on his brain, as the fluid was not able to drain properly. The tumor created a dam. The MRI looks unclear due to all the fluid built up in his brain.

In the MRI scan taken yesterday, shows major improvement. The scan is considered a healthy clean scan. The yellow highlighted spots are believed to be scar tissue, not regrowth of a tumor. The scan is much more clear, as the fluid is being regulated by his VP shunt. His cerebellum has returned to proper position in his brain, and so has his brain stem.

We are beyond thrilled about these results. This is just a check point in his treatment though and does not change what we are doing. It may have impacted treatment if it had shown Sammy had any tumor growth in either his brain or spine. But he had NONE! It is not typical to have growth at this point in the journey, as it has been only 3 months since last scan. But that does not mean it does not happen. It would have a been a huge game changer if growth was detected, as it means it is very fast growing and is not responding to the chemotherapy. So we have a huge sigh of relief that this scan was NED (no evidence of disease). Happy dance happening over here! 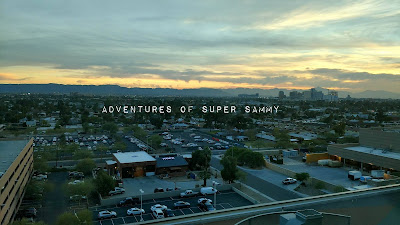 So for now we keep trudging forward as planned. We are set to start his third round of chemotherapy today. Currently getting him all ready with extra fluids and extra medications. We will hopefully start in the early evening. He will have 3 rounds of chemo still to finish. So this one, plus two more. Then I believe he will have another MRI done before beginning the Bone Marrow Transplant chemo round. That will be our next huge test in the journey. That he has a NED scan at approximately 6 months post surgery, while enduring chemotherapy treatments.

Along with his MRI, he has had a couple other tests in preparation to starting the new round of chemotherapy. On Friday he had a kidney function test. This is to ensure his body is cleaning out the toxins. That his kidneys are still working properly despite the chemotherapy drugs wearing down his system. His test came back normal. Actually better than normal! His numbers came back above average, and put him in the exceptional kidney function level. Another huge blessing in this journey. We could not have asked for a better report following this test. Praise God. We pray this continues to be the trend during the remainder of his treatment.

The last test he had done was a BAER hearing test. This is to test his hearing levels and make sure no damage has occurred to his hearing. One of the chemotherapy drugs that is part of Sammy's treatment can cause hearing loss, so they test his hearing before every cycle to detect any change to his hearing. So far he has gone unaffected. In fact from last test to this test, his hearing actually improved! Absolutely crazy. They did say it could be because he had a tiny fluid in his ears during the last test. But I will take it. Every round with his hearing unchanged, means the damage will be less. But we are fully prepared for the chance with each new round.

So we trudge on. Sammy is due to begin his third round of chemo today. We are doing a slightly different approach to his nausea medication to help be proactive for him. Last round he really struggled with nausea and vomiting, so we are hoping to approach it different and hopefully give him relief before it even gets kicking. Everything else about this round will be the same as the other two. Just another 28 days to put under our belt as he moves forward in his adventure. 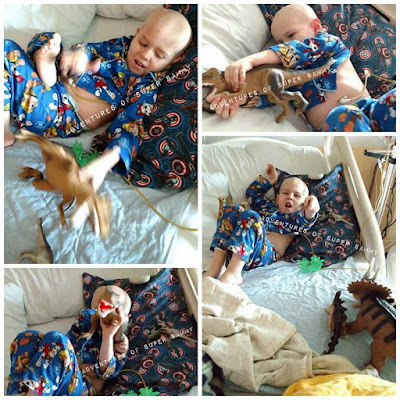 PRAY for Sammy as he starts his chemo today. PRAY that his body is forgiving to him. PRAY he is spared from the ugly side effects. PRAY he feels strong and healthy, despite his body enduring an unforgiving battle. PRAY for restful nights. PRAY for continued healing and recovery from the Posterior Fossa Syndrome. PRAY that our sweet Sammy continues to shine during this next round. PRAY that he is able to continue to endure therapy and progress forward during the days of treatment. PRAY for protection from sickness over Sammy and our family. PRAISE that God heard our cries and blessed Sammy with beautiful scans and healing. PRAISE that he is making amazing progress in his recovery. PRAISE for the constant blessings that our family has put before us along this journey.
Posted by Adventures of Super Sammy at 4:43 PM