Ten what? Ten is approximately how many bone marrow transplants that Sammy could receive based off the amount of stem cells they obtained during the bone marrow stem cell collection last week! I am in awe. We were praying for at least 2-3 transplants worth. We definitely wanted enough for 2. Just to be safe. They aim for at least 2, but focus on enough for one if there is a struggle in collecting. We are so blessed by this news. It puts a lot of our concerns at rest. 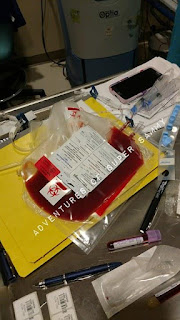 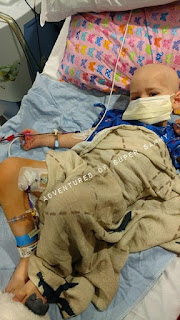 These stem cells will be used during the 6th round of chemotherapy that Sammy will be receiving. This last round of chemo is not apart of the Head Start III protocol that he is doing. It is an additional treatment. This last round is used as basically an atomic bomb on his body, and is used to kill off all cells in his body. Just in case some of the cancer cells were able to evade the standard chemotherapy protocol. As I wrote in our last treatment update, medulloblastoma is a smart cancer. It adapts quickly and evades treatment. This last chemo round is a last ditch effort to get it all. In doing so, it will kill all healthy cells. They will then use these stem cells as a rescue to help him recover from such a lethal round of chemo. However, once this all happens and he is given back his own stem cells. His bone marrow will forever be considered damaged. As it is a restart, replacement, regrowth based off of collected cells and none that are left in his body. They will not want to risk redrawing for any future use. 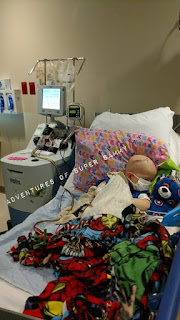 By his collection exceeding expectation, it means he will have spare cells available for the "what if" down the line. One of the things that is hard with his diagnosis is that there is a high chance of a re-occurrence at some point, alone with a high chance of him getting leukemia down the line. The drugs used to help beat this cancer, have a link to causing this later in his life. Again by having extra it means that he might never need to find a match for a bone marrow donor at any point in his life. This is a simple blessing that could be huge depending on where his journey takes him. 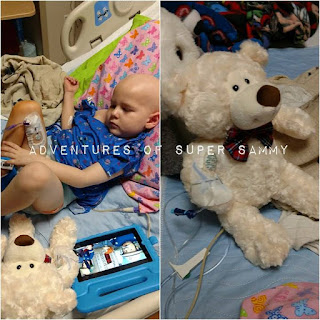 In the last few days, we have begun to evaluate some other steps in Sammy's adventure. One of which was the possibility of him being released this week until the start of the 3rd round of  his treatment. This put me in a tailspin, as there was a ton to figure out in being able to take Sammy home and being able to properly care for him.

After much discussion, everyone seems to be on the same page. That staying in hospital is for the best interest of Sammy. As much as we would love for him to come "home," There are a lot of complications and downsides to bringing him "home." Some of the complications are a wheelchair, a proper one for Sammy to use while he is discharged. Another is a hospital bed and making space for it in a hotel style room. Also a car seat for transporting him, along with a vehicle to handle both transporting him and said wheelchair. We also have the issue of access to therapies for Sammy's continued progress with recovering from PFS (posterior fossa syndrome). As we asked each of these to be addressed. Some came with answers, some opened the door for more questions. Ultimately, the lack of access for therapy during discharge is what is keeping us from wanting to leave. We are told he will not be able to get therapy as an out patient.

Why would we give up his therapies on the days when he feels his best? Why would we not want to push him when he is feeling his best? Why would we give up the progress he is making when we know we can push him harder and more because less limitations in place? Our big focus is on feeding therapy, something we can not do on our own. Why give that up when he is not feeling awful and nauseated? It makes no sense to me. So for now we are fairly certain that we will keep Sammy inpatient instead of releasing him for the next week. We will see what next round brings and if we are able to get something better in place for his therapies, so he may be able to have a week out of the hospital.

Our other concern is keeping him healthy, which would be hard if he is in contact with Logan who is in contact with all the germs at daycare. We would be at Ronald McDonald House during his discharge and all sleeping in the hotel style room. Sammy would be put at a huge risk of getting sick before the start of the next round of chemo. This is something we also need to discuss in the possibility of him being discharged. We would be still greatly limited by what and where we could go for him time out of the hospital. In part because of his mobility limitations, but also because of exposure limitations. We definitely still have quite a bit to hash out before feeling that discharge is in the best interest of Sammy. So for now we chug forward as we have for the last couple of months.

The other piece we discussed about Sammy's journey is the addition of inpatient therapy following his chemotherapy treatments. Sammy will likely do 1-3 months of intensive inpatient therapy following the conclusion of chemotherapy. So we would likely continue to live at Phoenix Children's through the summer. With the possibility of him getting discharged before the start of the new school year. So looking at July to September for his possible discharge. Ultimately it is looking more and more like we will be planning to live here for a year total. If allowing for delays and other mishaps along the way. We certainly have a lot to really consider and plan for as we talk about our 2017.

As for Sammy, he has been making lots of baby steps in his recovery. He has been doing some swallowing during feeding therapy, along with starting to make some purposeful sounds. Today he made and AHH sound. He is also starting to be able to navigate using an communication app on an iPad. It is basically an interactive picture communication board. But this means his motor function is improving enough to point and tap on the iPad. He is doing much better at grabbing and pointing. He is able to hold a weighted spoon and self feed with lots of effort. But he can do it. Little baby steps. He is also starting to be able to sit up with limited support for short amounts of time. He is continuing to shock and awe everyone with his progress.

Today his therapist made a comment about blowing past the goals she has for him. I just laughed. It reminded me of how he was always one step ahead with his goals when doing ABA therapy before all this happened. His ABA therapist were always having to modify and add new goals because he was just blowing through them so quickly. Definitely a problem we are grateful to have!

So for now things just keep progressing forward. Next week Sammy will start the 3rd round of chemotherapy. Just taking one day at a time, one moment at a time.