Right now we are in the waiting game, as Sammy begins his 4th round of chemotherapy. He was due to start chemo on Wednesday, February 8th, but they had to delay the start of treatment. His blood counts (ANC) were not where they need to be in order to start this cycle. They need to over double from where he stood yesterday. They were around 450 and need to be at least 1000. After discussion with his oncologist, Sammy received another dose of medication used to stimulate cell growth, in hopes to encourage his counts to start rising. We can not begin the next cycle until this number is up where it needs to be. We are definitely starting to see the effects of the chemotherapy on Sammy. This is one of them. It just takes time for his body to recover from the high dose chemo his body is receiving. I am waiting to hear the results from his labs today and where we stand in this process. UPDATE 2.11.17 @ 1130MST :: His counts went up from 450 to 6,500! They will being doing one more nuepogen shot today. They are doing this to be sure the reading is accurate and that the level maintains after the initial flooding of cell growth. They will keep tracking for a few days. And plan will be for him to start chemo on Tuesday or Wednesday.

On Tuesday, Sammy had his kidney function test, and his hearing test. The kidney test is giving nuclear medicine and doing lab draws to track how his kidneys filter out the medication. Sadly, this test did not go as well this time for him, as it has in the past. This time his kidney function came back just outside the low side of normal. The oncologist will be making some changes to his chemo doses based off of this change in his body function. The BAER hearing test went perfect. There has once again been no change detected in Sammy's hearing. Which we can not be more excited to hear. Both of these functions are being closely tracked because a deterioration in these functions is fully expected. Despite the down turn in his kidney function, they are monitoring it and making changes to help. The hearing is something that we are so blessed to hear. As the further out we can have with no change, the less the damage will hopefully ultimately be for him. When starting this journey we were told to expect Sammy to have to have hearing aides when this journey is over. We are now entering our halfway point and the longer out we get the less the impact of constant damage being done with each additional round of chemotherapy.

So for now we just wait. Wait until we get the okay to begin the next cycle of chemotherapy. And in the meantime we keep chugging away and making amazing progress in his therapies. In the last month Sammy has begun to talk and use verbal language to communicate with us. It is hard to understand, but he is trying and he is making sounds and words. It is so sweet to hear our son say mommy and daddy again. And also to hear him say "I love you." His journey is far from over and still very frustrating for both him and those around him, but we are chugging along. Giving him as much support as possible in helping to keep those frustrations down for all parties involved. Sammy has also begun to eat again. It is slow and he is very methodical in his chewing and swallowing. But he is doing it! His quantity is not very high as he is not used to having "meals." His g-tube feeds are continuous, at 60ml/hour. Which is only about 2 tablespoons of food per hour. So even if we stop feeds he really only does a few bites of food as that is all he can handle right now. Once we are done chemotherapy the feeding therapist will work on his meal volume and get him back to eating meals again. For now it is just about relearning the skill. We will focus on what he is eating and how much down the line. Sammy has also regained a lot of his functions. He is now sitting on his own. Still needing plenty of breaks, as it is hard work. But he is getting himself up on his own and sitting for longer and longer periods. We have also started to get him up in a supported standing position and even using a supported walking contraption, which he hates. But he is starting to get weight on his feet again. Our prayer and hope is that he will walk out of the hospital on the day we are finally discharged. 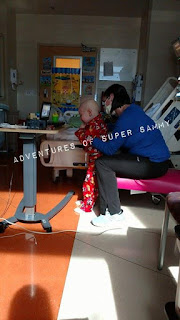 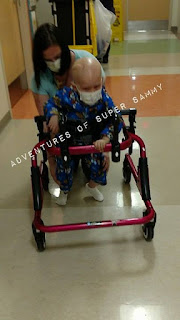 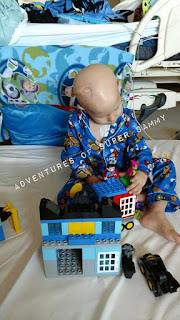 Sammy is doing Sammy. Just constantly shocking and awing everyone in his path. We have good days and bad ones, which is to be expected. But he always has his Sammy smile. And each day we feel like a little bit more of our Sammy returns to us. Slowly, but surly he is recovering. His recovery is remarkable. It surprises our nurses each time one comes back to work with us after a couple weeks of not seeing him. They are always amazed at his progress and how far he has come in such a short time frame. They are always surprised at his new skills and all that he is doing from week to week. We are so blessed. And God is so good.

PRAY for Sammy's continued recovery from posterior fossa syndrome. PRAY for continued healing of his brain and for protection from cancer cell growth. PRAY for his kidney function, that they heal and begin to function at normal range again. PRAY his blood counts continue to rise, so to delay the beginning of this 4th round as little as possible. PRAY for continued protection over his little body throughout this treatment process. PRAISE that his hearing has continued to be protected. PRAISE that we are hearing his voice. PRAISE that Sammy is gaining abilities again. PRAY for Logan in this journey and that he is protected from the stress and struggles on our family. PRAY for Logan's sleep, as he is having a hard time sleeping. PRAY for Charles and I, and our marriage. That we are able to continue to carve out time for each other and support each other in the best ways possible. PRAY that we can keep open lines of communication, and that we give each other grace where needed. PRAISE that we were able to spend some much needed time together while family was in town during the last half of January. PRAISE for the support of family and friends stepping in and helping to grant us the gift of time to spend together.
Posted by Adventures of Super Sammy at 9:16 AM