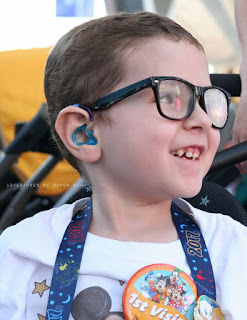 Samuel “Sammy” Puma, 6, of Buckeye Arizona, went home to heaven on April 12, 2018 after an 18 month long battle with medulloblastoma (brain cancer). He passed peacefully, surrounded by the love of his family.
Sammy entered the world on January 16, 2012, bringing joy to his parents and family. In April of 2015, Sammy welcomed his little brother Logan into his world, and immediately grew into an amazing big brother. Sharing his world with his little brother, and a love only brothers could have for each other.
From a young age Sammy loved adventures. In his short life, he was blessed with adventures from coast to coast during the numerous road trips taken with his family. Sammy loved his home team, the Arizona Diamondbacks. Each game at the park being a new adventure, filled with hot dogs, popcorn and of course a visit with D. Baxter.
Sammy lived life surrounded by lego builds, reading books with his parents, watching Ryan's Toy Review on YouTube (among other favorites), and running around with his friends at taewkondo and school.
During Sammy’s battle with cancer he became known as Super Sammy, although Sammy was no stranger to being Super Sammy. At age 3, Sammy was diagnosed with autism and began to learn a new way of life. He always took each day head on, living with his challenges instead of the challenges limiting his life. Cancer just became another challenge to conquer and overcome. Sammy spent his life demonstrating courage, resilience, strength, and living life to the fullest.
Sammy is survived by his loving parents, Charles and Kristen Puma, and his beloved brother Logan Puma, also his grandparents, Lori Scharnagl, Julian and Kathleen Puma, and many aunts, uncles, cousins and other relatives who loved Sammy deeply. As well as the numerous warriors standing with him during his fight against medulloblastoma. Sammy was welcomed by his grandfathers Dave Blanco and Albert “Bud” Scharnagl as he entered his eternal heavenly home.
Sammy’s Celebration of Life will be held on April 20th at 6:30pm at Desert Hills Baptist in Buckeye, Arizona.
A second Celebration of Life will be held on May 5th at 10am at Westminster Presbyterian Church in West Chester, Pennsylvania, followed by his burial.
Donations can be sent to Kristen or Charles Puma for Super Sammy’s Got Your Six, a foundation being created in his honor. 1934 E Camelback Rd #120-239, Phoenix, AZ 85016
Posted by Adventures of Super Sammy at 10:31 PM